A page from my book: Inner Tube Seats 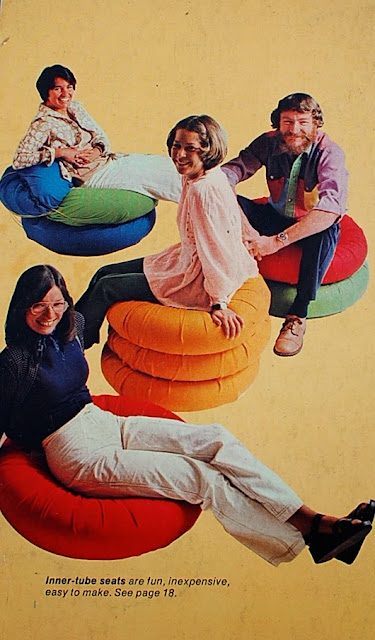 Whatever happened to this idea? The one where I feature a page from one of the books I'm selling at the etsy shoppe every Friday? Well, I did manage to do it once, and today makes twice. All of my usual Friday plans and routines—like hitting the estate sale circuit for the Day 2 discounts—have lately winged their way out the window for all the usual reasons (holidays, holidays). But today I'm back in the saddle, and though I visited just one sale it was the kind that really rejuvenates my interest in this whole enterprise (i.e., rifling through the things belonging to interesting people who are no longer with us). Today's sale was the estate of a lady artist who obsessively painted portraits of women—women of all shapes and sizes and ages and hairdos. I'm not saying that they're good or bad, just that I managed to limit myself to buying only four. And that two are fairly monumental. I'll post about them at a future date, but in the meantime you can check them out on my Instagram feed @thingummery.

I digress. This quartet of happy ’70s people reclining awkwardly on stuffed inner tubes is featured on the back cover of Easy-to-Make Tables & Chairs,  a Sunset Book published in 1976. Now I don't find anything "easy to make" except perhaps a bowl of ramen, but if I were the DIY type, I'd make me some of these plywood chairs and parsons tables, porch swings, pedestals and of course, the rainbow-rrific "inner-tube seats"! I must've been rushing when I did this etsy listing—that is the only explanation as to why I neglected to include a shot of the "balloon chair," which requires only a cardboard box and about three dozen balloons to construct. Wanna make one? Learn how here.
Posted by gef at 2:20 PM 15 comments: 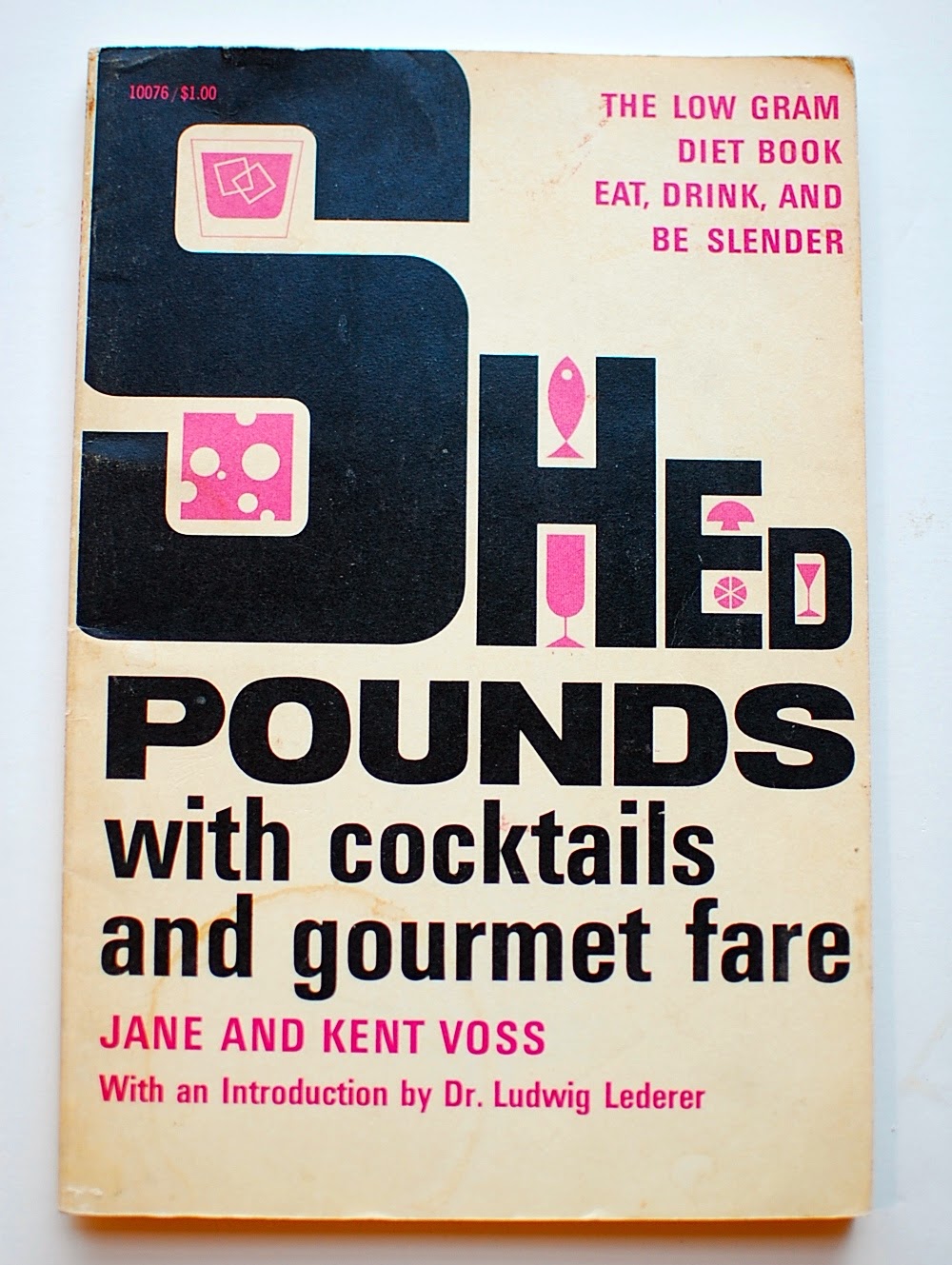 I noticed a significant uptick in sweaty folk at my local health club last week, which reminded me that once again I forgot to make any resolutions for 2014. Then I came across this diet book while I initiated the impossible task of cleaning out my office (that was kind of a resolution moment, right?), and found myself a game plan for the New Year: Eat, drink and be slender! Jane and Kent Voss (not to mention the redoubtable Dr. Ludwig Lederer) totally had me at hello. The first paragraph of Shed Pounds with Cocktails and Gourmet Fare:

At long last, here is a diet designed for those who have stopped smoking and need a weight control method which requires the absolute minimum of will power. It is also helpful for those who, having approached middle age, find it difficult to lose on the usual low-calorie diet. You may actually lose weight while eating more.

Who cares if I gave up smoking 11 years ago—did you know a Manhattan only has 6.9 grams of fat? 2014 is off to a promising start. Cheers to all! 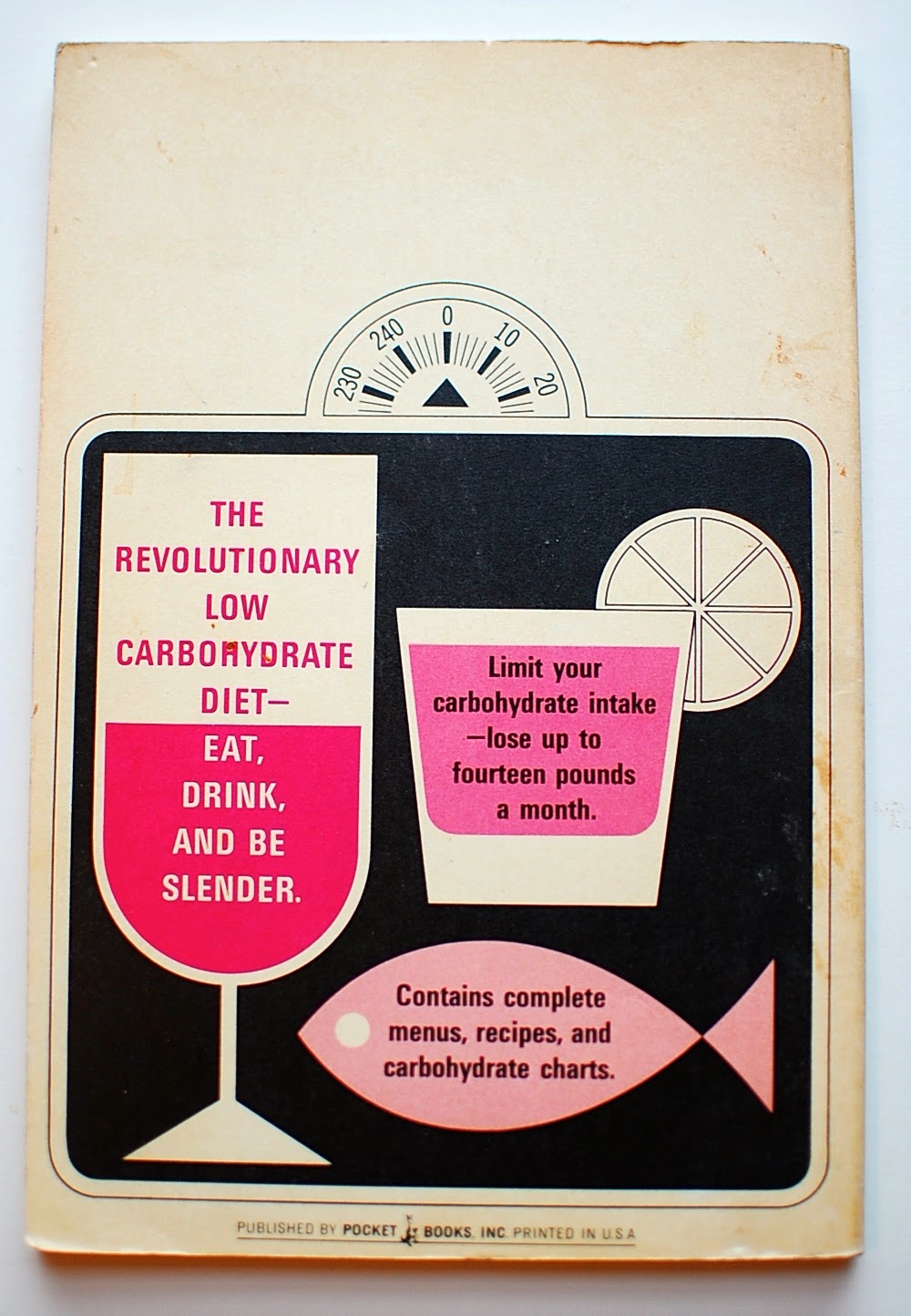 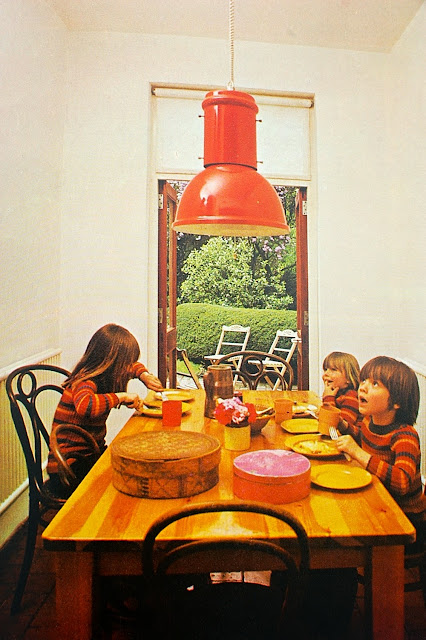 The greatest thing about blogging is being able to write about what you care about. It may be surprising to some younger folk, but there was a time when not everyone and their pet poodle had the opportunity to gas on about their personal business, passions and interests in a public forum. In my days as a magazine editor, I was often asked why I didn't write more—there was always so much more glory to writing and little attention paid to the proverbial Man Behind the Curtain—and I just said that I only like to write about what I like to write about. Which is why, if you flip through my (not very thick) book of clips, you'll mostly find articles about Renaissance Faires and old-man bars. I must've set up a thousand celebrity interviews back in the day, but the only one I ever conducted myself was with Lucy Lawless. To say I was a Xena, Warrior Princess superfan would be seriously understating the case.

That's the sort of attitude that will limit one's assignments as a freelancer (why doesn't my Breyer-horse pitch have any takers?), but I got lucky recently when a former colleague gave me the opportunity to write about my love for vintage-decorating books in The Wall Street Journal. Check it out here. 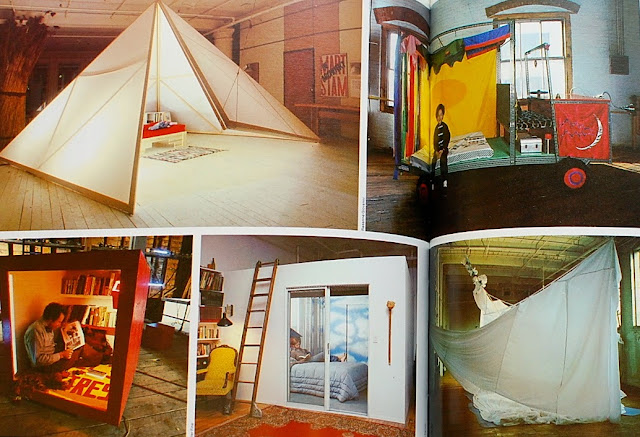 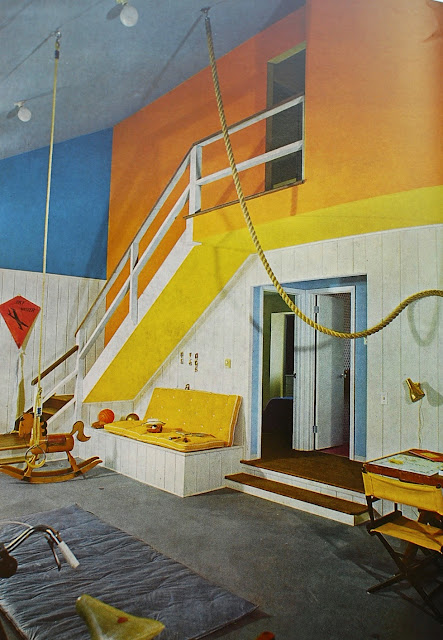 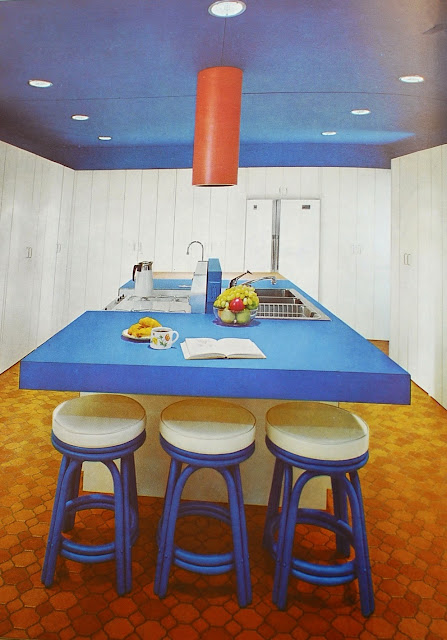 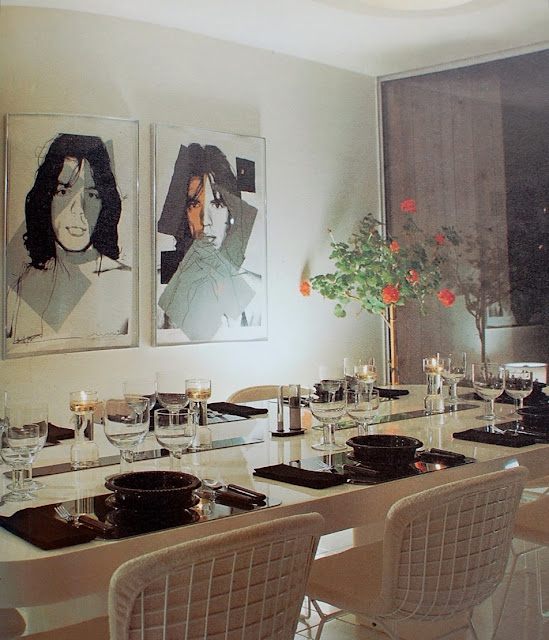 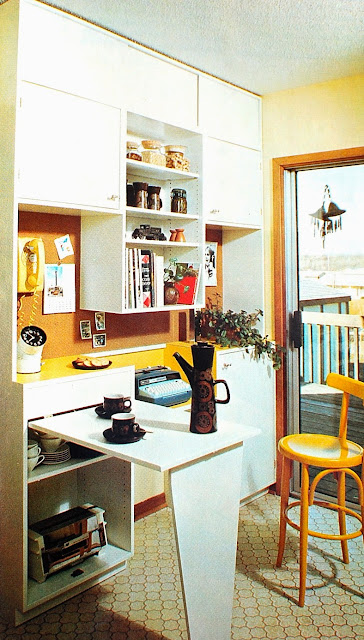 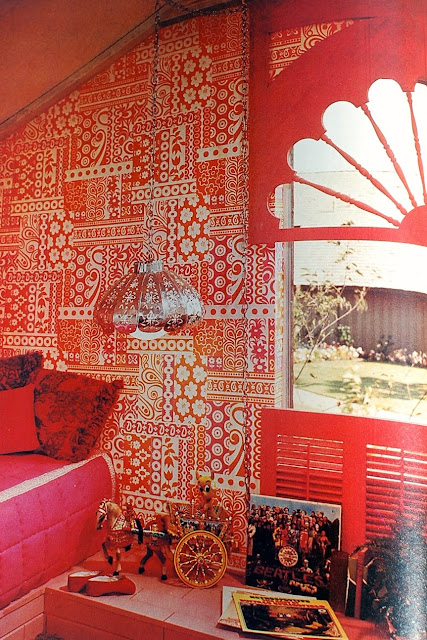 And a very merry atomic Christmas to you all

Now we are seven. 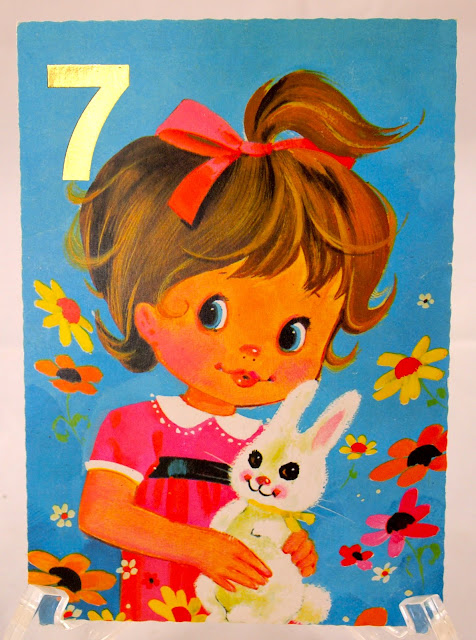 I continue to absent myself from this here blog, and I continue to reach for the same tried-and-true excuses (seriously, scroll back a year—if you've got nothing else to do, which I doubt—and you'll encounter the same strain of bitching). For me, the problem is the annual Thanksgiving pilgrimage to the old stomping grounds (see previous post) being followed so closely by the protracted celebration of the birthday of my second child, who, you guessed it, just turned 7.

My Finnish relations sent me this adorable postcard on the occasion of my seventh birthday several hundred years ago, and naturally this pack rat still has it (really, what don't I have?).

Anyway, I'd like to tell you that I've reformed, that I purchased and wrapped all my Christmas gifts weeks ago and sent out my holiday cards ages ago and that every task has been efficiently managed down to the most minute detail and that I'm most definitely not ailing from "cedar fever," but that, my friends, would be a lie and right now the kids are watching A Christmas Carol (1938 version) without me so I've really gotta go. I promise far more fascinating (and frequent) posts in the New Year!
Posted by gef at 4:31 PM 1 comment:

Happy Thanksgiving from the old homestead 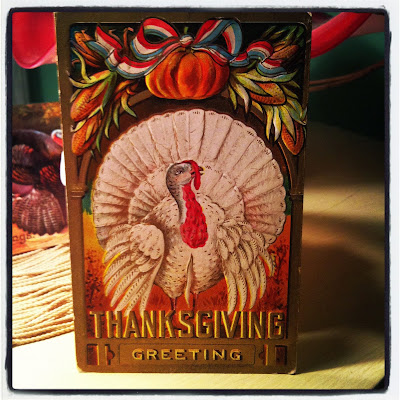 Jeez, it's been a while since I've been here, yet I have so much to say! For now, Thanksgiving greetings from vintage land (i.e., the house I grew up in) will have to do. 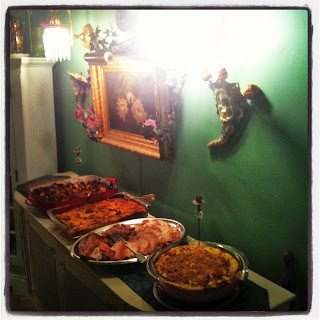 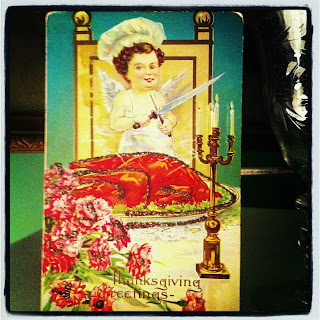 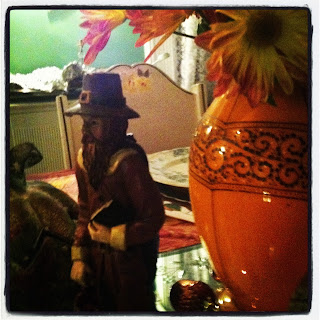 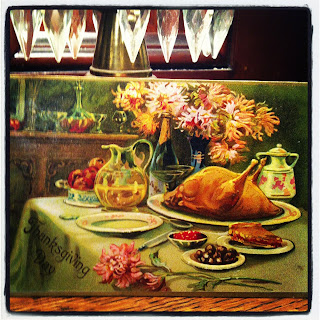 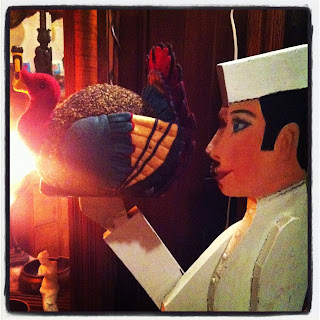 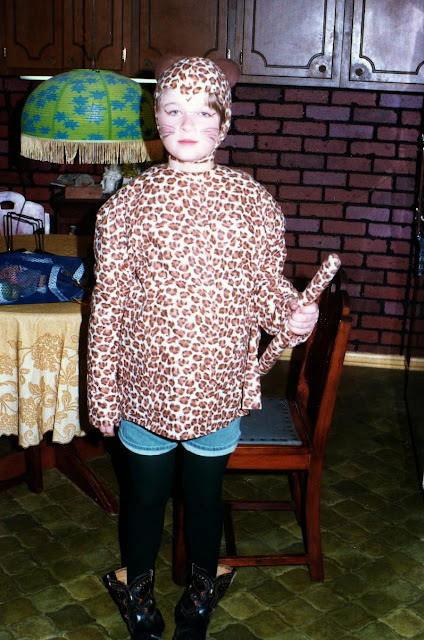 When do kids stop trick-or-treating nowadays? Yesterday a mom I was chatting with at choir pickup made reference to the idea that this could be her daughter's last year of hitting the streets in pursuit of a sugar high. Her daughter is 10, like mine, but mine doesn't show any sign of giving up Halloween, though she has shown some discomfort with the whole dressing-up-in-costume thing. Granted, she was never a kid who liked to disappear into her disguise, with full makeup or rubber masks or odd, uncomfortable clothing, but now more than ever, she likes a costume that's basically still her—but better. For example, this year she is Katniss Everdeen, which is basically being herself but with a braid and a mockingjay pin and more boyish clothes and a bow slung across her back. And most important: a really excellent jacket.

I guess I was pretty much the same way. Somehow, a costume violated my dignity. I think this photo of me as a leopard (or really, a half leopard, half 1980s East Village chick, given the tights, cutoffs and boots) was taken when I was 9 years old. I remember getting those cowboy boots for my first horseback riding lessons, which I started taking at that age. You might think my mother made that costume, but I'm reasonably certain it was thrifted—my mom was always very vocally opposed to store-bought costumes back in the day, but I don't really remember her hand-crafting my brother and I costumes either. But then again, the Superboy and Supergirl costumes below have a touch of the DIY about them, don't they? Because the store-bought costumes I remember from the ’70s were the kind that just consisted of a cheap mask and a plastic apron/smock-type thingie that basically had a picture of what you were supposed to be on the front (the Hulk or Raggedy Ann or whatever). My mom didn't like those and hence we were pretty snooty about them too.

The only costume I remember wearing after the leopard was a "beatnik" outfit I assembled from my actual 9th-grade wardrobe, much of which came from a thrift store or head shop. I wore it to march with the high school marching band in our town Halloween parade, and that's the last time I remember wearing a costume as a kid (that was also my first and last year in marching band).

Anyway, the real reason I'm posting those photos—especially the leopard photo—is to marvel over our full-on 1970s kitchen, with the avocado green linoleum, the faux brick wall covering (I don't know what to call it—I mean, it wasn't wallpaper) and that crazy rice-paper lampshade, which I imagine was totally flammable and inappropriate for the kitchen. And eek, those cabinets, all of it long gone as that room has undergone many transformations over the years, but at this point it was newly expanded: the area where I'm standing used to be a pantry and a mud room and we were all very pleased with our official eat-in-kitchen.

Just a few snapshots of that 70s childhood of mine, which I've posted about here, and I think about often, as I peruse the vintage decorating books I collect and sell in the etsy shoppe. 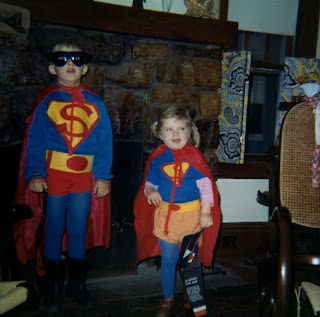