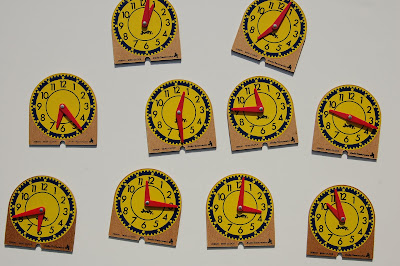 Having a child in elementary school has a way of jogging memories—of the heady scent of ditto machines and brand-new Buster Browns, of academic triumphs and trials. Though they mostly came later (algebra was my undoing), I tend to dwell on the trials. One was tying shoes. With the help of my saintly kindergarten teacher, I managed to finally nail that one by year's end. The other was telling time. I completely sucked at it and I always blamed my parents. They took me out of second grade for three weeks to go on a family trip to Finland—just as the unit on telling time was getting underway. It's funny how I've held that against them for all these decades—but they recently informed me that I only missed one week of school because we went over winter break (if you have a penchant for total darkness and arctic temperatures, might I suggest spending the holidays in Finland?).

Anyway, when I saw this box of teaching clocks at Bussey's flea market, naturally the first thing that flashed through my mind was an image of Mrs. Voget holding a similar teaching aid in the front of the class and calling on me to tell the time while I sat, slackjawed and clueless, when I usually had an answer for everything. Time stood still, as it were. So why would I instantly fork over six bucks for something with such unpleasant associations? Well, look at Mrs. Higgenbotham's clocks—they're so ding-dang cute! And this is at least one grudge my kids won't be able to nurse through their adult life cuz I'm totally facilitating their time-telling skills by prominently displaying these on the windowsill in my dining room. 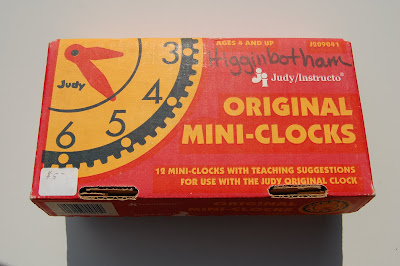