How to draw the well-accessorized nude 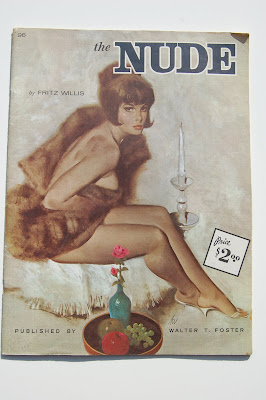 One of the things I've learned about San Antonio since I started rifling through the things its dead have left behind (morbid but accurate) is that this town is (or was) chock full of Sunday painters. Seriously. Maybe it's not the town so much as the midcentury era when folks would take up art as a hobby. Or do people still do that? I mean, apart from Adam Gopnik, of course. (I enjoyed his New Yorker piece but it only confirmed what I already knew—drawing is motherfreaking hard.) So it's no surprise that I come across a lot of Walter T. Foster's big floppy art-instruction manuals and that I tend to snap them up because I find the colors, the type, the (false) promise of being able to render a sad clown or adorable kitten portrait as adroitly as the one on the cover just so...irresistible.

I also had a small collection as a kid—all on the subject of horses, perhaps not coincidentally the only thing I can draw with any confidence now—which makes this another one of my nostalagia-fueled pursuits, for the most part. I mean, they're also total eye candy, right? Walter died back in 1981, but the company continues to publish new manuals in his name as well as reprint some of the old ones in a Walter T. Foster Collectible Series. I was bummed to find that the company is not immune to merchandising tie-ins; most of the offerings for kids instruct them on the finer points of drawing characters from Disney, Pixar, Nickelodeon et al. Bleh. They may no longer publish a book devoted to painting clown portraits but they do have a manual devoted to drawing zombies. Never thought of looking to old Walt for the zeitgeist but there ya go. 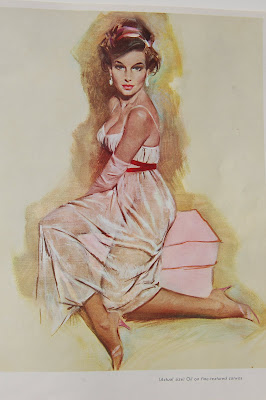 One of the volumes in the Collectibles series is How to Draw Pin-ups and Glamour Girls; back in the day, there were several devoted to sad-eyed babes striking awkward poses in their boudoirs, including this one, The Nude by Fritz Willis. I love the models' supercomplicated hairdos, and the props. Half-drunk Chianti bottles are a recurring theme... 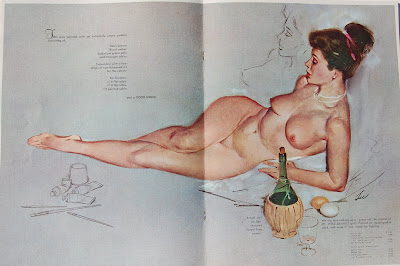 And there's nothing quite like an artfully placed Spanish guitar to preserve a girl's modesty, but you knew that already. 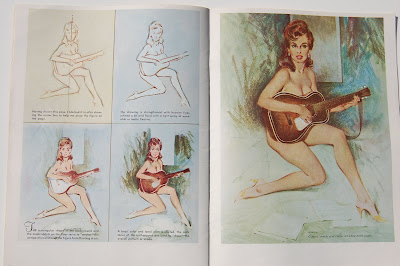 The best thing is finding old sketches stuck between the pages of these manuals. A total estate-sale bonus that sets one's mind a-wandering... Who was this amateur Vargas living in a ’60s tract house in a drab, colorless San Antonio subdivision? We'll never know. 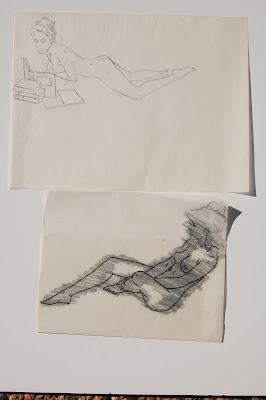